Last Wednesday – 5 July 2006 – at 4:30pm my Dad, Alexander Campbell McLanachan, known to the world as Campbell, died after spending several days in Crosshouse Hospital, Kilmarnock. He was 65 years, 4 months and 19 days old.

Dad became unwell on Sunday when he was at the local Co-op store to pick up the papers. He suffered a Cardiac Arrest in the back of the ambulance, but the Ambulance crew managed to get him re-started. Upon arriving at Crosshouse, Dad suffered a second Cardiac Arrest. This one, however, lasted 30 minutes. After we had been told about that, we basically knew that things were very grim. As it was, the Intensive Care staff tried to ventilate him, cooling his body down so that it was only using the minimum amount of energy to run his major organs in an attempt to see if they could stop any brain damage from setting in. As it was, when all the drugs were withdrawn and he didn’t waken up, we knew that it was only a matter of time.

That was the Tuesday morning. As it was, he survived until the Wednesday afternoon. I always knew he was a fighter! When he did finally pass away, it was just Mum and Dad together in the room. When Mhairi, my Sister, and I thought about it for a moment we realised that that was how we, as their children, would have wanted it.

Yesterday – 11 July 2006 – saw Dad’s funeral. It was a happy affair – if happy can be used to describe a funeral. On Dad’s request, there were very few black ties – I wore my kilt!!! Never thought I’d be doing that! The minister kept the service fairly light. And when Dad’s 2 tunes started up – “The Great Pretender” by The Platters and “Great Balls of Fire” by Jerry Lee Lewis – there were chuckles throughout the Crematorium.

On behalf of the family, I’d like to thank everyone who turned up and packed the Crematorium out yesterday. We were all really touched. Also, our thanks to the staff at the Stewarton Co-Op for looking after Dad when he became unwell and to the staff at A&E, Intensive Care and Ward 3B at Crosshouse Hospital for their care of both Dad and the rest of us. They did not “sugar coat” anything and told us what we needed to know without trying to get our hopes up too much. 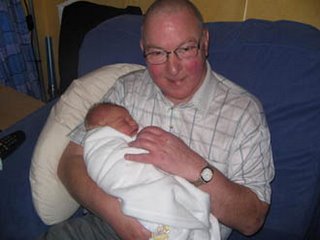 Folks, can you all do me a wee favour? The next time you’re talking with your loved ones, remember to tell them that you care about them and make sure you do before it is too late.