I turned up in Edinburgh for the latest tour event of the year having not picked up a pool cue since the Scottish Championships some 3 weeks previously! I walked in with only expecting one thing – that I would lose my first 2 matches and be knocked out of the tournament in double quick time.

The club looked excellent – built in a room made up of different little “caverns” that each held 3 tables and with the bar area off to the side in another couple of “caverns”. We were only using 9 of the club’s 12 tables, so the matches would be races to 6 on the Winners’ side and 5 on the Losers’ side.

The draw paired me against Gavin Wiseman from Glasgow. Gavin’s a handy player and I enjoy playing him as he will give me a good run for my money. As it was, when we started, I managed to jump out to leads of 3-0 and 4-1 fairly quickly only to be pegged back to 4-4 before I knew it. Gavin then won the 9th rack to put him “on the hill” – needing only one rack to win the match. Luckily, things started going my way and I managed to win the last 2 racks to steal the match 6-5.

It was during this match that all play stopped to welcome back Pat Holtz from this year’s World Pool Championships in Manila in The Philippines where he had managed to reach the last 16 of the tournament, earning himself an automatic spot in next year’s event and Scotland a second spot in the tournament. He was also drafted in by ESPN to do some commentary with American Jerry Forsythe and they made a great duo. Well done, Pat. We’re all really chuffed for you and proud of your achievement in putting Scottish Pool on the world-wide map. I, personally, hope to hear Pat back in the commentary box at the major events again before too long.

Next up was another good friend, Pete King, another handy also from Glasgow (never leave this guy even a sniff at a bank or kick shot!). Another quick start from me, another fight back from Pete and another case of me staggering over the finish line to progress to the last round of the Double Elimination phase, again by 6 racks to 5.

Now, time to face Tam “The” Talent – the SAPPA Tournament Director and ranked in the top 8 in Scotland. This time, it was Tam who had the quick start, being 4-0 and 5-1 up before I started getting my brain in gear, stopped making so many silly errors and started playing. I managed to get back to 5-4 before making one last mistake that allowed Tam in to finish off the match and send me to the Losers’ Bracket with a 6-4 scoreline.

I had to wait a wee while for my next opponent but finally local player Jim Purse emerged to be the opponent to stand between me and my first-ever last 16 spot. As it was, I was on a roll and never allowed Jim a clear shot for the first 2 or 3 racks. In the end, I had a comfortable 5-0 victory, giving me my first spot in the last 16 – and my first payday in a SAPPA event, guaranteeing me at least £20.

As it was, I was only to play one more match as Davy Jack from Arbroath was having the tournament of the year, blitzing his way through the field with unnerving accuracy. Simply put, he blitzed me 7-0! I had a couple of complaints as I was making some decent shots, but just not following them up with finishes. Ach well, I made the last 16 – next target is for me to get to the last 8 of a tournament.

Before I go – a few wee pictures for you all. This is how over-excited some people can get at SAPPA events. 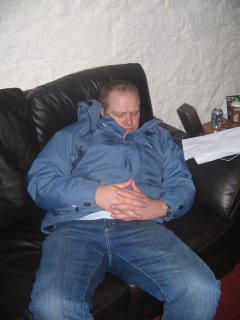 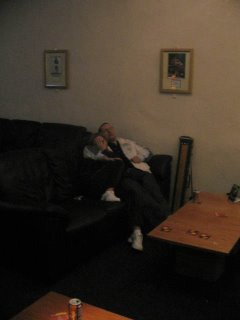 Pat Holtz catches up on a little shut-eye. We can let him
away with this one, he was just off a 27-hour flight from Manilla! 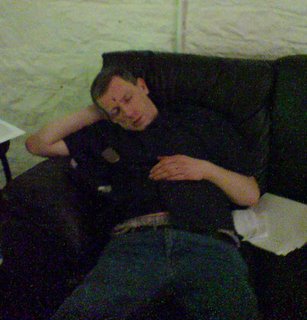