Sunday 12 February, the day after my Mum’s party, saw the second of this year’s SAPPA Tour events, this one being held at Riley’s in Stirling – always one of my favourite clubs in Scotland.

Another excellent day with several more SAPPA debutants making an appearance and giving the Scottish Tour a try. As last time, the format was Double Elimination until the last 16, with Single Elimination to find the winner.

My first match was against Usman Sabir, one of the aforementioned first-time players. Although it was a scrappy match, I did manage to win it 6 – 0. The match also contained one of the most amazing shots I have ever played. The important balls, the cue ball, the one-ball and the 6-ball are all that I can remember from the shot. They sat on the table like this… 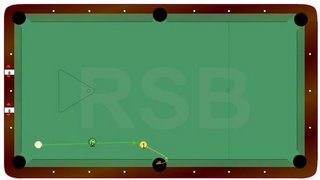 With the balls as they lie in the diagram above, I was obviously snookered on the one-ball (in 9 Ball, you have to hit the lowest numbered ball on the table and jumping the cue ball over an intervening ball is legal). I dug out my jump cue from my case and lined the shot up, intending to get the one-ball into the pocket at the bottom right corner of the picture. I hit the shot and the cue ball jumped over the 6 and hit the one-ball on its landing. This caused the one to jump into the air a little and landed on the corner of the side pocket. The one ball then jumped vertically into air and dropped straight into the side pocket! This caused the games around me to stop as we all laughed at one of the most amazing shots that any of us had seen. I promptly missed my next shot, which was straight on! Typical!

Next match and my reward for beating Usman was to play number 4 ranked Clark Smith. In a very scrappy match, which at times looked like neither of us wanted to win a rack, Clark managed to get a few more good rolls of the balls than I did and came away a 6 – 3 winner.

Over to the losers’ bracket I went, a place I am more than used to. I had Ian McLachlan in my next match. Things started OK, but at 2-1 up a couple of drunk eejit football and rugby fans started singing and shouting at the top of their lungs. This threw me totally and my concentration was out the window and heading down the road! Before I knew it, I was 4-2 down! By this time, the management of the club had kicked the a***holes concerned out of the club and I started to play once again, managing to bring it back to 4-4. Sadly for me, things were not to go too well in the deciding rack as I made nothing on the break and when Ian came to the table, he started pocketing balls and managed to fluke the 9-ball to finish the match off. His comment of “the best player didn’t win” after the match was greatly appreciated.

As ever, you can read what happened in the rest of the tournament by going to www.scottish9ball.com